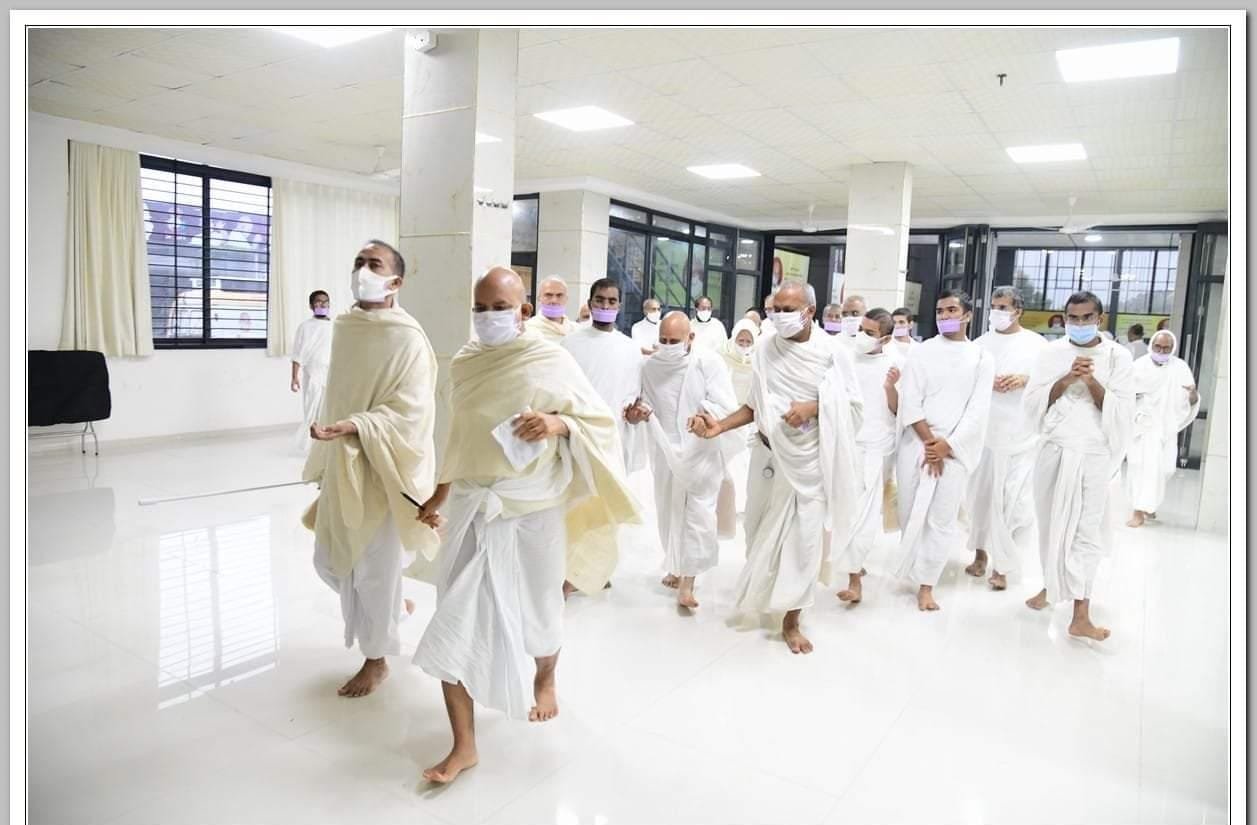 🌸 Jyoticharan got moving after completing the historical Chaturmas of Bhilwara 🌸

Acharya Mahashraman, who is indifferent to the flowing tears and raining clouds, has departed for Mars.

After visiting about twelve and a half kilometers, Acharya shee rereached Mangrop with non-violence journey

Make yourself especially happy by doing the sadhna of equality: Acharya Mahashraman

20.11.2021, Saturday, Mangrop, Bhilwara (Rajasthan)
After completing the historic Chaturmas in Vastranagari Bhilwara, the Ekadashmadhishasta of Jain Shwetambar Terapanth Dharmasangh, representative of Lord Mahavir, leader of non-violence journey, Akhand Parivrajak Acharyashree Mahashramanji, along with his Dhaval army, moved his Jyoticharans at 8.41 am from Terapanth Nagar Chaturmas place in Aditya Vihar. The tide of sentiments of the residents of Bhilwara rose. Acharyashri Mahashramanji, who was indifferent to the tears flowing from the eyes of the devotees, raining clouds and unfavorable weather etc., traveled for public welfare. Thousands of devotees of Bhilwara had reached early in the morning to bid farewell to their idol, while hundreds of devotees from areas like Bidasar etc. were present to welcome their idol. Farewell expressions were clearly visible on the faces of Bhilwara residents. He did not want to send off his Aaradhya, but was unable to say anything because of his immense faith in his Aaradhya. His words were not being articulated, but everyone’s eyes were visible urging Acharya Shree to stop. Acharyashree, a seeker of equanimity, departed Mars from the Chaturmas place at the appointed time. The present Janmedini started following the couple feet of her adoration. In the midst of light drizzle, Acharyashree visited the courtyard of the Government Higher Secondary School located in Mangrop after visiting about twelve and a half kilometers. Where Acharyashree was greeted by the Mangrop residents and the school family.

Providing holy inspiration to the devotees present from the Dr. Sarvepalliradhakrishnan Bhavan built in the school premises, Acharyashree said that efforts should be made to make a person special happy. If the mind remains pure, there is equanimity and peace, then there can be a matter of special happiness. A person can make himself particularly happy by observing and practicing to live in equanimity.